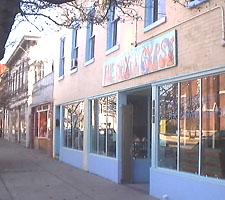 When Rosendo and Laura Ucàn used to drive their big blue van around Louisville's East End suburban developments, selling tacos to Spanish-speaking roofing workers at construction sites, it didn't take long for the word to get out that this food was GOOD. Before long, lots of locals were following the blue truck - The Mayan Gypsy - and lining up for a share of the goodies wherever it stopped.

Growing popularity led the Ucàns to open a small restaurant in a downscale storefront in Phoenix Hill; and again, the food was so good that it lured diners from all over town despite its rather ominous location across the street from a welfare mission. Urbanites and suburbanites alike flocked in to savor the joys of Mayan food, a savory Mexican-Central American cuisine from where Guatemala meets Mexico.

Now they've moved again, to much larger quarters a few blocks west and a notch upscale, joining the antique shops, boutiques and a historic candy firm that anchor a gentrifying block of East Market Street.

Don't expect familiar Mexican fare. This is high-style Yucatan and Guatemalan cooking that shows Ucàn's creative genius in the kitchen: Everything on the menu is amazing - subtle and complex, sometimes spicy but never fiery - and it is fully competitive in quality with the city's best restaurants.

Everything is good even if you can't pronounce it - and you probably can't, as Mayan terms like "Tikin-Xic" (a marinated salmon dish) and "Poc Chuc" (grilled skirt beef) don't roll easily off Anglo tongues. And even if you can't say the names or pronounce the dishes, it's all explained in clear English on the menus.

Fifteen entrees (plus daily specials) range from $12.95 for several dishes including mole de ave (chef's choice of turkey, chicken or duck in a savory dark-chocolate sauce) to $16.95 for medallones de filete a la Veracruzana, pan-seared filets of beef in a tangy tomato-green-chile sauce with a shot of tequila. Other dishes we've tried on recent visits include tamarind lamb escabeche ($15.95), butter-tender slices of roast lamb in a dark, sweet-sour tamarind sauce; cochinita pibil ($12.95), falling-apart pork, sweet and moist, wrapped in banana leaves and savory with warm but not fiery Mayan spice.

Dinners come with two of the Mayan Gypsy's remarkable side dishes, which include such exotica as Brazo de Reina ("The Queen's Arms," a tamale-like dish made from ground pumpkin seeds and greens) and Tok-Cel, grilled lima beans dusted with spice, a simple but eye-opening side dish that will change the way you think about this common legume.

The wine list is short but reasonably well chosen, and the markup is pleasingly low, placing several decent Italian and American table wines in the under-$20 category including the $18 Monna Lisa Sangiovese that we used to wash down dinner one autumn evening.

Desserts are good but, curiously, depart from the Mayan theme in favor of American-Continental standards such as crepes, sorbets and a daily-changing round of "chocolate things." Never mind! Whatever he cooks, Ucàn does it well.

Dinners here rarely exceed $50 for two; one one recent trip, dinner for three, including wine and tip, rounded off at $80. $$